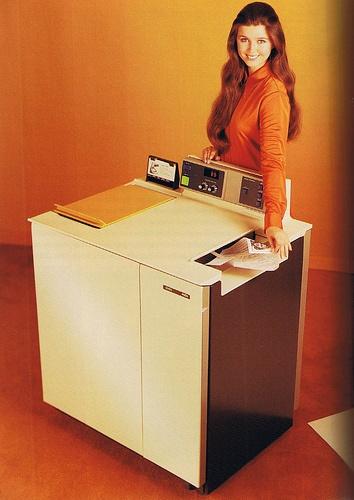 Did you sell these copiers, did you ever see one, or maybe you weren't  even a twinkle in your Mom's eye when these copier manufacturers were the King of  the Road!

"Tell Us About Some Old Copier Companies", was a question we posed to our Print4Pay Hotel members (P4P'ers as we call em) about a few years back, as you can see it was very popular thread. Special thanx to all of the P4P'ers for the information they shared!!  Enjoy!

This was truly the Golden Era for selling, prospecting and demo skills went hand in hand.  I can remember those DEMO days, everyone would load up a copier in their station wagon and then proceed to knock on as many doors as possible in order to conduct a demonstration on the spot!  The winners were the guys (not many gals then) who did not come back with the copier but a check or lease/check in hand!

Adler Royal: Headquartered in Mountainside, NJ, these systems were manufactured by MITA, one of the first full lines I carried when I owned my own dealership. DSM was Bob Morganthaler (think)

Yorktown: I've only seen one and couldn't even remember the model number, all I can remember is that the system was huge, a dial was used to select how many copies you needed. (Art Post)

Yorktown was made by Toshiba in the 70's  (jomama)

Singer-Friden: model 1082 It was a tabletop estat. Also GAF had 2 models a small desktop and a huge 40 cpm floor model that used strobe lamp exposure. all of these used roll fed paper like most but not all of the machines  in that era. (jomama)

Saxon: I sold them but don't remember much about  them...how they started or where they went. The company I worked for had the  liquid toner Savins and the Saxon was a dry toner alternative. (Old  Glory)

Copystat: Before Saxon bought them, the liquid estats were made and  sold under the Copystat name. I worked for them in 1970/71. My first introduction to copiers. We thought the process was a miracle.  (jomama)

Selex: Was a secondary line to Canon in the 80's.  Canon introduced the Selex line as a bid machine category. They  were basically just stripped down Canon units. (rj nelson) 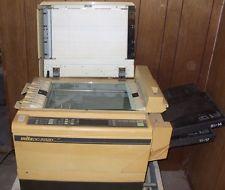 Mita: Was one of the rock star manufacturers during the early to late eighties. (art  post)

Mita's big claim to fame was that they only made copiers, so they were the experts. No company money going into R&D for camera's, watches or whatever. (rj nelson)

Towa: If memory serves me correctly they were headquartered in Morrisville, Pa. They relabeled Sanyo copy machines. Back in the 80's.

Sanyo: From what I recall had a pretty decent line up  of systems, they also OEM'd for Towa. Back in the 80's.

Rex Rotary did sell copiers developed and produced in Denmark,  among others the "mailbox" (sort of) that could be wall mounted! (Anders And)

Eskofot: Also the attached 1001 from Eskofot was danish. (Anders  And)

Royal: Royal was liquid based copiers.(Anders And) I have  been selling copiers since the 70's. I started with Royal Bond units which were  the size of a chest freezer and you could royal the dial up to 20 copies at 10  cpm. (RJ Nelson)

3M: Earliest copiers were the ThermoFax brand - ran  copies past an Infrared lamp to transfer image to coated paper. I believe from  the early 60's. I sold the 3M 545, plain paper, single tray, no reduction or  enlargement. (Old Glory)

In mid to late 60's introduced the Model 107 & 209 2 step copiers - exposed a pink film to light and ran through a heater  to transfer image to coated bond paper.

Next technology was M191 &  215 series in mid 70s - electrostatic process using a crush roller & heat to  fuse the toner to coated paper - created a shiny surfaced copy - paper supplied  in rolls and was light weight.

Finally in late 70s they moved to  electrostatic process technology similar to today's imaging process and plain  bond paper. This is when they started going to Japan for products - prior to  this 3M manufactured products here in the states. (Lucas Distributing)

To  add to an earlier post regarding the 3M 209 with the pink paper. The process was  called dual-spectrum. After that 3M had the VQC line of electro static copiers  ending with the VQC III. They really helped me be successful when I started in  this business 30 years ago because it was so easy to pencil sell an upgrade to  plain paper based on the high supply costs of the treated paper of the VQC  III.(Old Glory) 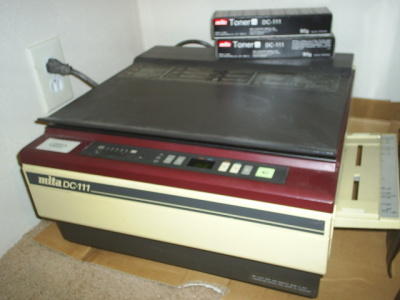 SCM  Corporation: 1960's SCM was among the world's leading producers of coated paper  copiers machines capable of automatically creating copies of an original  document on specially treated paper coated with zinc oxide. In the mid 1970's  SCM marketed a plain paper copier, the 6740, which it purchased from the Van Dyk  Corporation. Back in the 60's & 70's

Apeco: (American  Photocopy Equipment Corp) for a history of Apeco click here . Back in the 60's,  and 70's. The American Photocopy Equipment Company (Apeco), which manufactured  and marketed photocopy machines, was incorporated in 1954 after acquiring the  name and assets of a limited partnership that had been in existence since 1939.  (Havard Business School) read more here

Olivetti: Olivetti is a well-known Italian brand;  you can find Olivetti copiers in the United States, but they are more common in  continental Europe and the United Kingdom.

Here's a few more old copier companies that we did not have a response for Monroe, AB Dick, Olympia, Silver Reed, Swintec, Pitney Bowes, Gestetner and VanDyk Corporation.  In reviewing some and old document from 1993 there were 25 different brands engaged in selling copiers in the US.

Wow..this brings back memories.  Does anyone remember the small Eskofot coated paper copier which MOUNTED ON THE WALL?  I sold a ga-zillion of them!!   How about that Olivetti Copia 305 and 405 with those huge "toner boats." My dad actually worked for SCM for over 20 years and that was where I got my start.  Great memories!!  Ken Scarborough

I was in the St. Paul HQ of 3M and in Duplicating / Copying Products from '69 to '84. For part of that time I was the Advertising Manager, at other times in several middle management jobs. I remember the fateful decision to private label from Toshiba, which was, in hindsight, the death knell of the Division. Annon

Take a trip down the Copier Memory Lane here!

I remember Kodak well, especially the EktaPrint, here's a cool link I found for the press release https://www.nytimes.com/1984/0...ktaprint-copier.html

copyme commented:
Great information Art! Thank you!
Art Post commented:
This is interesting As an IT decision - maker, it's crucial to keep up with the latest trends and industry predictions. On the other...