Make no bones about it, I'm a junky for technology.  I had heard about the periscope app about a year ago, but never downloaded the app.

The periscope app allows users to stream video from their Apple or Android device from wherever you have a cell or wifi connection. Users of the app can access the periscope global map and see icons of where users are streaming video from.

About a month ago,  we had a blizzard here in the northeast, with some additional time on my hands I thought it would be cool to download the periscope app and see if anyone was streaming video from the Caribbean Islands.  Yes, I was jonesing for some sun and nice weather.  With the power of the periscope app I was whisked away to the islands of Saint Lucia, Aruba, Montserrat, Martinique and Jamaica to see if anyone was streaming video from the beaches.  I can tell you, that I was not disappointed and made a note to myself that next years vaca is back to the Caribbean. 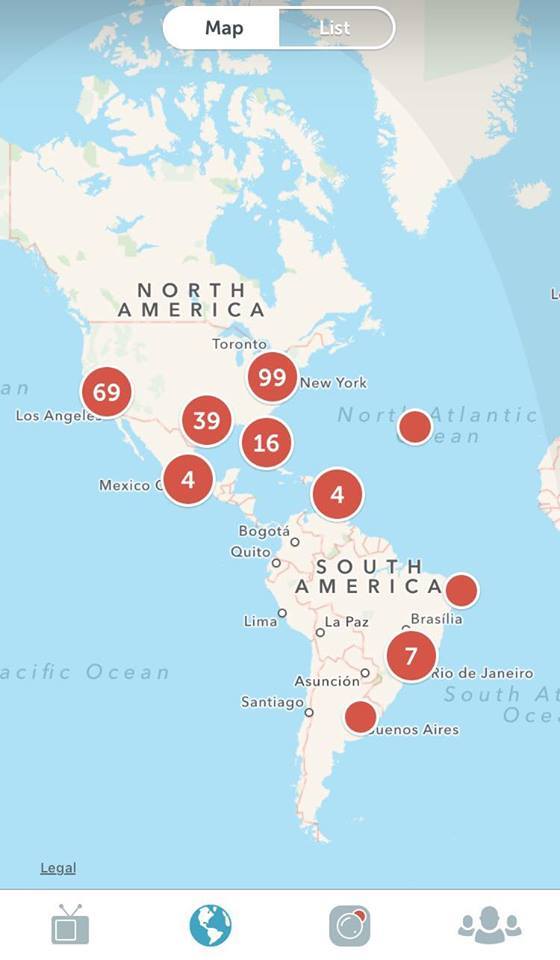 For a couple of days last week I found myself working from my him office due to an severe issue with Big Foot.  I won't elaborate on the Big Foot thing, let's put it this way, I was hobbled for a few days.

I enjoy working from the home office, no distractions, can focus better, put the news on in the background, roll of the sleeves and get stuff done!

Thus, I working on a proposal when my cell phone makes a tone that I've never heard of before. I picked up the phone and noticed that there was text for a periscope alert that GAP Intelligence was streaming live video via the periscope app.

I thought, hey, I know some people at GAP, and there's some Gappers that are members of the Print4Pay Hotel.  Good enough for me, I accepted the notification and there was the live video from GAP Headquarters in San Diego.

Thus, there was Erin, thanking everyone for tuning in, and thanking everyone for their first inaugural periscope video.  Erin brought us in through the front door, gave us a virtual tour of the office, introduced the staff, and told us what each Gapper does at GAP.  During the video, users are also able to make text comments and or ask questions via the texting option.  There I was more than three thousand miles away and I was thoroughly enjoying the opportunity to see the Gappers, learn more about what they do, and learn more about what makes GAP unique and different.  One user posted a thread and asked if GAP was looking for help, and that user was directed to contact the HR person at GAP.

Thinking Periscope Has a Place

If GAP can do it, then why can't we?  Wouldn't it be awesome to give your own virtual tour of your dealership to your customers and potential prospects?   I had no idea that GAP was going to live stream that day, just happened to be at the right time at the right place.

One of my ideas would be to schedule such a virtual tour of my office, and this can be accomplished with alerting your prospects and clients through social media. For those that are creative and pioneering, we could also promote and schedule micro demonstrations of hardware and software.  Maybe, even a big thank you to existing clients from the principal of the dealership.

Some Ideas for Live Stream Events

When the GAP periscope had ended, I realized that it just wasn't Erin that I knew anymore. I was introduced to the entire team, and was able to put names with faces, learn more about their culture and came away with the feeling that I had a better relationship with the people at GAP.  That personal understanding of the people and the knowledge can help build better relationships with our customers!

If, you don't have the app, you can down load it on Apple or Google Play, and who knows maybe you'll see me giving our first periscope of our office here in NJ.

Erin from Gap Intelligence wrote up and awesome blog gap intelligence Joins Periscope about their event and she did a much better job of explaining the app than I did.  Make sure you leave a comment!

Very interesting how this could play out within the sales process as well as enhancing the client experience with ones dealership.

You give me the beginning of a new idea, Art.

Awesome,, put one of the events on the p4p calendar for us

I will see what we we have lined up etc. I like the ability to stream a virtual tour of the office and events that we do.

Awesome,, put one of the events on the p4p calendar for us

I've been 'scoping for a few months...even checked out Anchor...fun stuff.

Well done, Erin. Periscope is a fantastic tool. Sharing events, presentation etc. via Periscope is just like having the whole world with you in the room. Note to self: follow Gap and Art.

I loved it also maybe because of the Patriotism that came out, could have been the name of the movie also (lol), but the copier salesman...
8/3/2011:01 PM

Woe, at first I wanted to personally kick that writer's ass! He thought that was pretty clever I'm sure. What a dweeb. I bet he couldn't...
8/3/2010:50 PM
That movie got such horrible ratings but I loved it. Not sure why, but saw it in the theatre and have watched it many times after that.
8/3/2010:47 PM